Going Above and Beyond in Supportive Healing 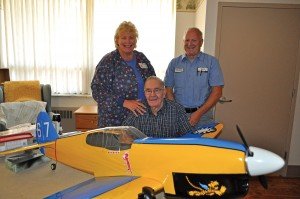 Conneaut Lake resident, Lou Moyers had severe pain in his foot that he did not realize was actually a fracture in his ankle. This became clear only after he had a fall that brought him to the Emergency Room. Upon getting x-rayed, it was discovered that not only did Lou have a break in the one ankle, but his other ankle also fractured when he fell.

With two broken ankles, Lou was admitted to Grace Rehabilitation and Health Center’s short-term rehabilitation neighborhood to heal and rebuild strength in his ankles. Each morning, he would go to the Rehab Center to work with the therapists, but found in the afternoon, he was really looking for something he enjoyed doing to keep himself busy.

Prior to his fall, Lou’s hobby of 50 years was building and flying large model remote control airplanes. In fact, over the years, he has built 50 different remote control model airplanes as well as creating the flying field on Route 6 outside of downtown Conneaut Lake. Facing a three month stay, Lou wondered if he could spend his afternoons constructing his 51st airplane in his room at Grace. He approached Town Square Nurse Manager, Charlie Peirsel, about his plan, who in turn checked with Grace Administrator, Sheila Bundy, about Lou’s request. Sheila’s reply was, “If that will promote his healing and give him a positive experience at Wesbury, then let’s get him a work space.”

Housekeeping brought a table into his room, and he began his routine of rehab in the morning and construction in the afternoon. Model remote control airplanes can be quite large with wingspans and lengths of more than four feet, so as the days went by and Lou’s plane became closer and closer to completion, he needed a larger space to paint it. Wesbury Maintenance Supervisor, Keith Peterson was quick to step in and construct a painting area in the Maintenance Shop for Lou to use.

After 72 days, Lou began putting the decals on his completed airplane and prepared for his return home. He says he is grateful to the Wesbury staff for going above and beyond to make his stay personalized to his interests. Now back at home, Lou says, “Across the board they took care of my mind, my body and my spirit. They allowed me to continue to pursue my passion and alleviate any sort of downtime by letting me stay busy the way I want.”

If you or a loved one are planning a surgery or are in need of a supportive rehabilitation program, consider Wesbury’s Town Square Short Stay Neighborhood. For more information, contact Grace Rehabilitation and Health Center Admissions Coordinator at 814-332-9233.