Congratulations on Your Jubilee, Fr. Tito! 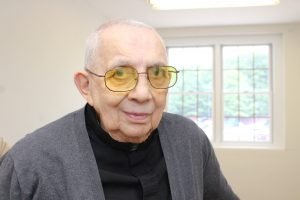 At 93, Father Rocco Tito continues to inspire those with whom he lives at Wesbury Retirement Community in Meadville. As a resident, he had supported the Catholic population by saying Mass and offering sacraments for many years. He considers the Eucharist, care for the sick, and meditation among the most inspiring aspects of his life. A native of St. Bernard Parish, Bradford, Father Tito’s first assignment was as parochial vicar at St. Joseph Parish, Warren. He was Chaplain at Warren State Hospital and served as a moderator of the Christian Life Communities and the Warren and McKean Catholic Youth Councils. In 1965, he was appointed parochial vicar at St. Brigid Parish, Meadville, and was named chaplain at Allegheny College. He also served as a chaplain at Saint Vincent Hospital, Erie, from 1967-71. Father Tito was pastor of two parishes: St. Paul, Erie, and St. Walburga, Titusville. In Titusville, he was presented the Titusville Area Health Center’s Humanitarian Award for having a positive impact on health care services. Additionally, he was named diocesan director of the Apostleship of Prayer. In 2002, he became Senior Associate of St. Brigid Parish, Meadville, retiring in 2010.