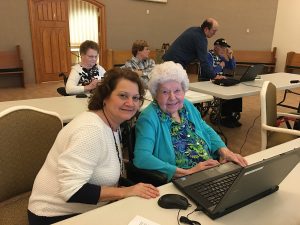 For Ann Janiak, living in a “nursing home” was never in the cards as far as she was concerned. She was in her nineties, and as she aged, she remained sharp as a tack and felt she knew what moving into a “home” really meant. When she began to have physical issues, she had two daughters living nearby, Judy and Barbara, who could take care of her in her home. There was no need for a change of environment in spite of Ann’s growing isolation, loneliness, and lack of socialization. As the challenges and incidents became more frequent, and the need for someone to always be around to make sure Ann was safe, it was decided Barb should leave her home with her husband and move into her mom’s house during the week and Judy would stay with her on the weekends.

Barb felt compelled to take care of her mom and had promised she would not put her in a “nursing home.” It is a promise many adult children make to their parents, after all, most adult children know their parents very well and can take better care than a complete stranger. Sadly, what many don’t consider is the amount of physical and emotional stress that can accompany taking on the role of primary caregiver of a senior parent. Barb found out over three years of being in that role, she became resentful and tired. One day in early November 2015, Ann’s knees began to buckle, and she went down three times that day. The third time, Barb sat down on the floor with her and cried and said, “I’m sorry Mom; I just can’t do it anymore.”

Barb called an ambulance and Ann was admitted in the hospital. She was transferred to the hospital’s Transitional Care Unit, but upon her discharge needed more therapy, so she was admitted to Wesbury for a short rehab stay at Grace. Not all of her days were good ones, especially early on. She had mobility as well as emotional issues and seeing how some other residents were progressing, left Ann feeling somewhat left out as her situation had plateaued and she was not going to be returning to her home. But things changed when Danielle from Town Square Life Enrichment made a point of including Ann in activities and eventually, her permanent move to Wesbury’s Grace Rehabilitation and Health Center changed her.

For years, she wore only house coats or “dusters,” and now, she preferred to get dressed up, put on a necklace or earrings when she was meeting with her fellow residents. Ann loved when someone would comment on how nice she looked and was happy when Barb brought in a new blouse to wear. Before moving to Wesbury, Ann got her hair done once or twice a year, but now she looked forward to her weekly visits with Amy at the Beauty Shop at Grace. She enjoyed when family came to visit from out of town, especially her son, grandchildren, and great-grandchildren and they would dine together in the Neighborhood Grill.

Having been shut in at home for such a long time, Ann could only watch Mass on television. Living at Grace also gave her the opportunity to attend Mass weekly again; receiving Communion was a blessing to her. When Father Tito was no longer assisting with Mass, Ann began attending weekly services with Wesbury Chaplain, Rev. Sam Marchetta. While hesitant at first, as she had never attended any other denomination service outside of Catholic, she looked forward to Rev. Sam’s services after her first attendance and appreciated the one-on-one spiritual sessions that he offered her and her fellow residents. 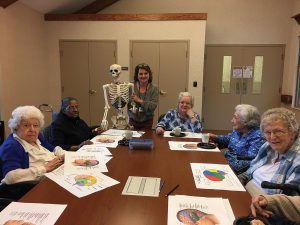 Ann Janiak (left) with Life Enrichment Coordinator Pam Schultz (center) and some of her fellow classmates during a Senior Scholars class.

Ann loved to check out who the Resident of the Month was and bragged a bit when it was a friend of hers. That’s why she was thrilled to receive the honor last May, which was also the month of Mother’s Day. “It was comical to go outside for a ‘walk’ (pushing her around in her wheelchair) because she had a fear of ‘missing out’ on what was happening inside with the other residents,” says Barb, who visited with her Mom practically every day. “She would never admit it, but Wesbury really brought Mom out of her shell and helped her to blossom.”

More recently, Ann became a part of the newly formed Senior Scholars program started by Melissa Swartwood, Director of Life Enrichment at Grace. She enjoyed the monthly topics from the various instructors, the projects, the field trips, and even the homework. It gave her an opportunity to exercise her mind. As graduation neared in June, Ann’s health began to decline, and she passed away two days before graduation. As Barb and Judy were making arrangements for their Mom, they decided to switch locations of her funeral from Linesville to Wesbury to be surrounded by her friends and family. At her calling hours, Melissa brought Ann the diploma and tassel she would have received. The family found the gesture to be both touching and emotional as they placed them with her. Originally, the decision to move Mom to a nursing home had left them feeling guilt ridden and defeated, and they never dreamed their Mom would blossom there. But, she did. She had really made a home for herself at Grace.